Note: I received a free copy of this product for review purposes. Some links in this review might be affiliate programs, so I'll make some coffee money if you buy. You get it at the normal price though!

Reviewed by: The Spanish Experiment 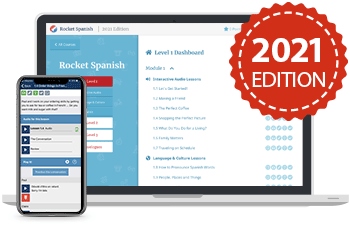 The idea behind Rocket Spanish is that it supposedly focuses on the most useful grammar and vocabulary first, rather than bogging you down with stuff you don't need to begin with.

This is helpful for building your confidence and getting you quickly using your Spanish in real-world situations (which is where the best learning happens).

But rather than stopping there, Rocket Spanish backs up this "once over quickly" approach with a full grammar course (included in the price) that aims to give you a more nuanced understanding of how Spanish actually works.

Rocket Spanish doesn't quite have the profile of big players like Rosetta Stone, and it isn't quite as flashy as Fluenz or Duolingo. So how does it stack up?

(Before we dive in, I recommend signing up for your free trial of Rocket Spanish so that you can follow along with this review. You don't need a credit card, and you'll get the first few modules of the course to play with.)

The very first few lessons in Rocket Spanish (if you follow the lessons in order) are these "interactive audio" style lessons.

This is similar to a podcast-style course (like you might get with SpanishPod101). You can download them to your phone, or listen directly on your computer.

There are 31 interactive audio lessons, averaging around 20 minutes each. Each lesson is structured around a conversation. The two hosts play it out, and then break it down for you to explain the meaning and practice the pronunciation. 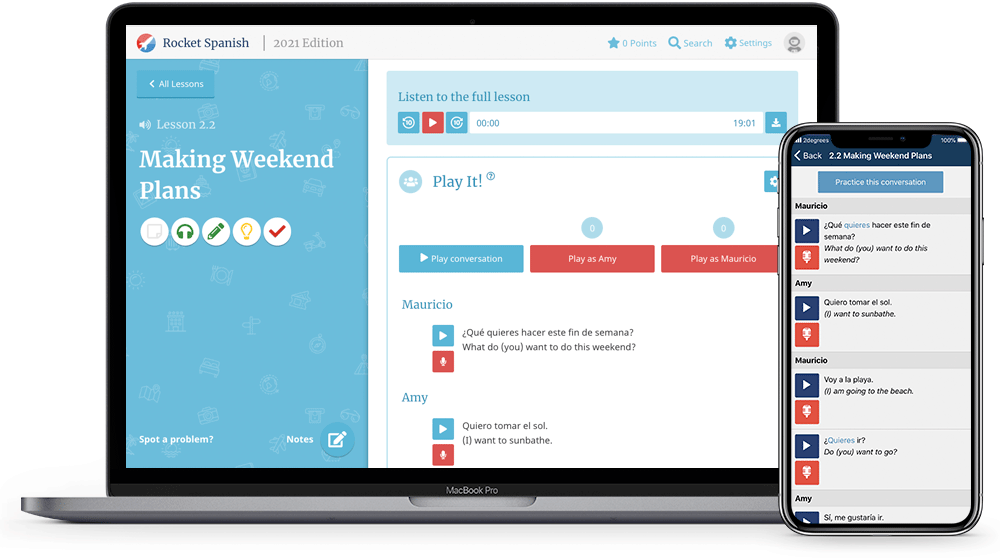 Rocket Spanish interactive audio lesson. Each lesson is around 20 minutes of audio, with additional exercises and transcripts available online or through the app.

The conversations start off quite basic — introductions and “pleased to meet you”s — but then they start to get less ordinary.

I was quite pleased to find that one of the very first interactive audio lessons in Rocket Spanish taught me how to order a coffee.

And then winning the Academy Award for "most realistic language course dialog", by the end of module 7 the two hosts are arguing over whose job it is to clean the bathroom. 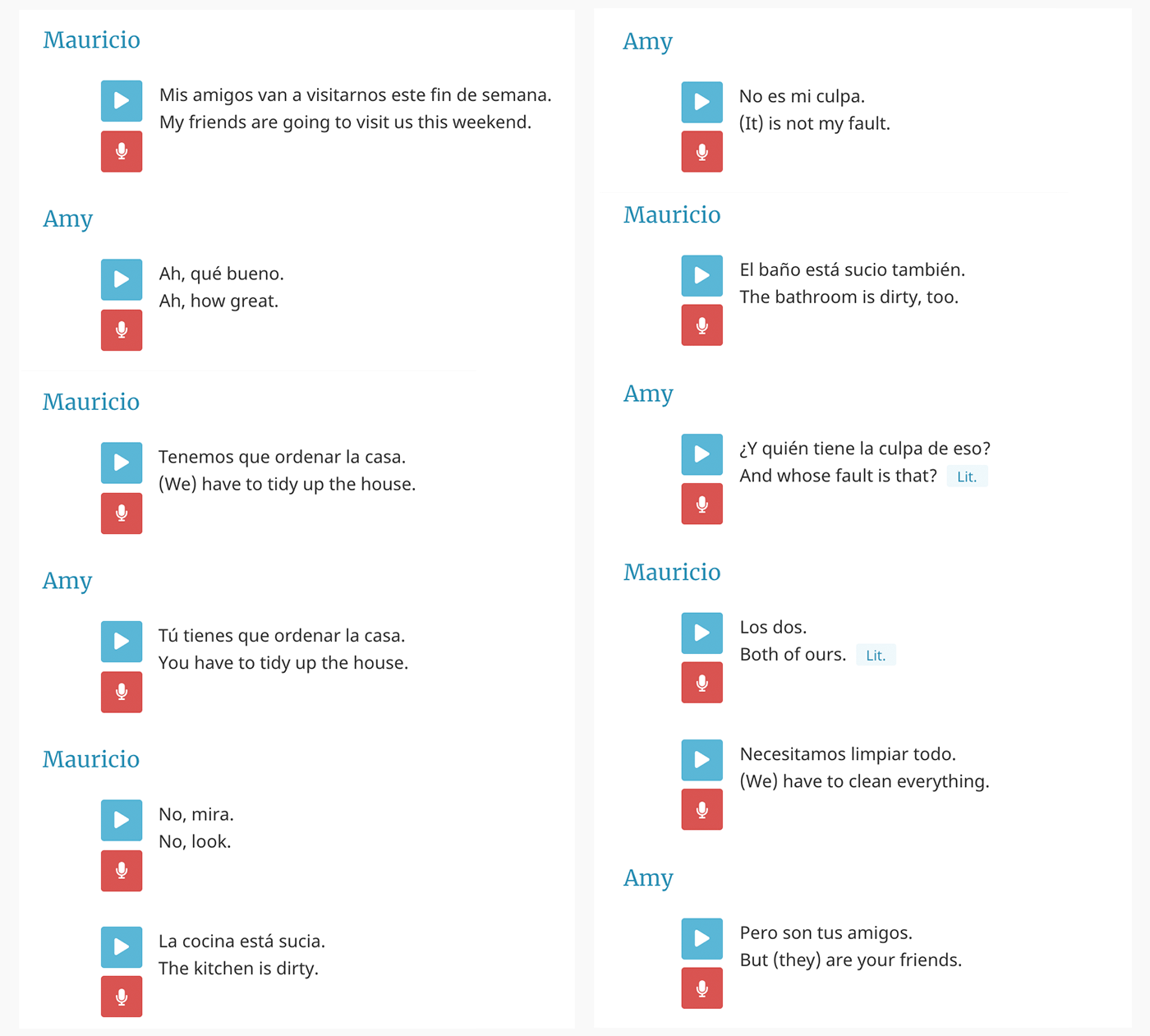 If you want realistic conversations, I'm pretty sure I had this exact conversation last weekend.

Each lesson covers a bunch of grammar and vocabulary, and during the lesson the two hosts will go off on tangents and explain how this is similar to that, and why you need to be careful about that other thing. For me, learning the grammar and vocab in context like this seems a lot easier and more natural.

Compared to some other podcast-style courses that are a bit more off-the-cuff, these audio lessons feel quite scripted, and the jokes are occasionally corny. (This is something of a trend across all Rocket Languages courses.) They can also be a bit slow, especially in the first few lessons.

But I was impressed at how much I learned just from these lessons. Because they're scripted, they're better structured than more informal podcasts. They cover a lot of ground. And they're not anywhere near as dull as Pimsleur.

I would go so far as to say that if you just need some survival Spanish, the audio course might be all you need. But if you're wanting to work towards full proficiency, you'll need something that goes into a bit more depth.

It seems that Rocket Spanish agrees with this, because they also give you another kind of lesson...

#2: The "language and culture" lessons

Alongside the 31 audio lessons, there are 33 'Language and Culture' lessons. (I think Rocket Spanish is trying to avoid saying "grammar" like it's a dirty word.)

These lessons are mixed in alongside the audio (podcast) lessons, so you'll do a few audio lessons, and then follow it up with these lessons.

This is a good, solid, traditional language course, like you might find in a textbook or a college course (but with more interactive elements).

These lessons are straightforward and comprehensive, and cover all the important building-blocks of Spanish.

And the 'culture' part?

This mostly feels like it's been thrown in to justify the Culture part of 'Language and Culture'.

Part of the problem is that Latin America is a huge place. What goes for Argentina might not go for Bolivia.

So Rocket Spanish has chosen not to go too deep into any one culture. The result is that you get a bunch of shallow observations that don't really amount to much of a cultural education.

But to be honest... you're probably not here for the cultural lessons, are you? The language part of the Language and Culture lessons is great, and that's the important part.

(UPDATE: Recent news is that Rocket Languages is working on updating the culture parts of the course. By the time you read this, these sections will hopefully be more interesting.)

The grammar section of the course goes into more detail and teaches you the building blocks of Spanish.

Ok, so we've got audio lessons. We've got language lessons (and culture lessons, such as they are). The third major component to Rocket Spanish is all the extra tools that sit alongside this core lesson material.

Every lesson in Rocket Spanish comes with a range of 'Rocket Reinforcement' tests to make sure you master the material from all angles: Reading, writing, listening, speaking, and recall.

These game-like tests use spaced repetition and keep presenting you with the stuff you've been tripping up on until you ace it. One of my biggest weaknesses when learning a language is moving too fast through the material and not actually learning it properly. I've found these exercises challenge me to slow down and really learn the material, and my recall and confidence is better.

One of my favorite tools is the flash card game — simple but effective.

You get a flashcard game for every module, along with a bunch of other games and interactive exercises to reinforce your learning. You can also create your own flashcards.

Most of the tests are self-graded. The tool will tell you whether you got it right or wrong, but you choose whether you found it "easy", "good" or "hard". You'll keep practicing until you mark them all as "easy".

Like the rest of the Rocket Spanish course, they don't force you to keep working on something until you master it. You're free to hop around and skip anything you don't like.

One of my biggest fears when learning a new language is that nobody will understand me. It's kind of a problem when you're teaching yourself and you don't have access to a tutor or classmates to give you feedback.

The Rocket Spanish solution to this is called "Rocket Record".

In every single audio example in the course, you're given the option to record your pronunciation.

When you finish speaking, it will give you a score out of 100, and highlight the parts that didn't sound quite right. 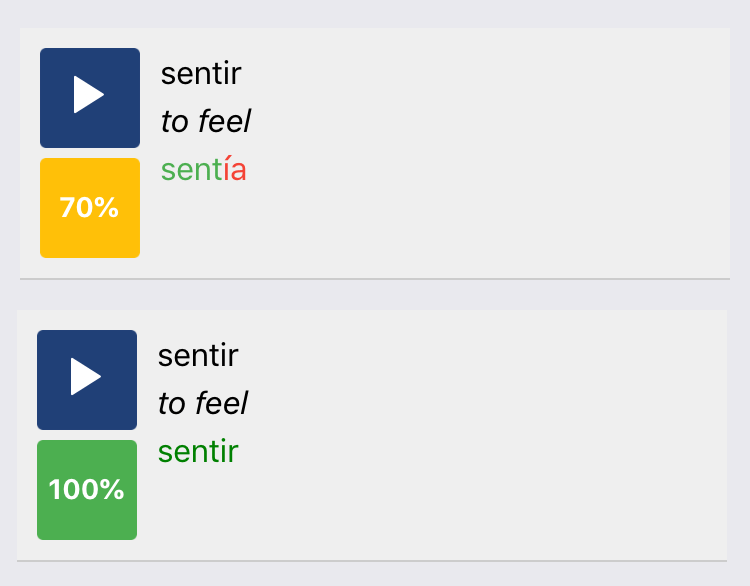 How good is your pronunciation? Listen to the audio and then try it yourself. The voice recognition will show you what it heard, and highlight the parts you need to work on.

And it bears repeating: This tool is built into every single audio example in the course. I looked it up — that's 2666 voice comparison phrases.

(Remember, you can sign up for a free trial of Rocket Spanish to try this out for yourself.)

If you're going to be using this tool a lot, I recommend doing it through the app for iPhone or Android. You can do it through your computer browser, but it is a bit more complicated to get it set up with your microphone.

On your phone or tablet, it just works.

Who is Rocket Spanish suitable for?

Latin American Spanish vs European Spanish — is this a problem?

Just like English speakers can understand other kinds of English, speakers of European Spanish can understand Latin American Spanish just fine, and vice versa. You can still use Rocket Spanish if you're looking to visit Europe or other Spanish-speaking parts of the world.

The things I really like about Rocket Spanish are...

And the bad things? 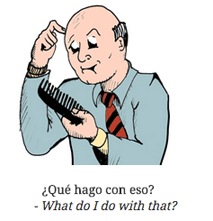 Here is a little cartoon to make that nasty grammar go down easier.

When it comes to delivering a whole lot of learning and enjoyment for not all that much money, Rocket Spanish does a great job.

The audio course is fantastic for building confidence. The language and culture lessons do a good job of explaining things in more detail when you're ready to dive deeper, and the testing tools are great for getting that knowledge into your head.

Rocket Spanish is especially good at getting results quickly because it focuses on giving you the important and essential language first. But the addition of the full, detailed grammar course means that it can also be as comprehensive as you need it to be.

When you consider the number of tools you get, the effectiveness of the material and the low cost, Rocket Spanish is still one of the best value interactive Spanish courses on the market at the moment.

Hey! Want to try Rocket Spanish free for 6 days? Get it here!