Talking about pain with "dolor" and "tener"

How to say when you feel sick or sore in Spanish 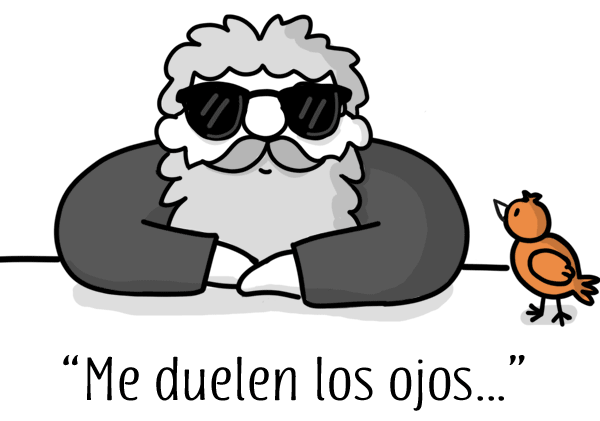 True story: When travelling in Southeast Asia, I got bitten by a monkey. It meant I needed to get five doses of rabies vaccine.

Do you know how much fun it is to go into a health center in a country where you don't speak the language, and explain that you need a rabies vaccine because you were bitten by a monkey? I had to mime "monkey" and "bite", and it was hilarious for everybody.

Because charades will only get you so far, it's worth learning how to say what ails you in Spanish. This is a lesson I hope you never need, but just in case...

In Spanish, you don't say "my head hurts" like you would in English. You literally say "The head hurts me" (and people just assume that if "the" head hurts you, that head is probably yours).

For your head to hurt you, it needs the verb "doler" (to hurt).

If the part of your body that hurts comes in twos (or more), and they're all hurting, the "doler" verb will turn into the plural form:

(Note that there are two words for "ear" in Spanish: oreja and oído. If you've got an earache, it's an issue with your inner ear, so you'll use oído.)

"Having" pain with "tener"

Another way to express pain is to use the verb "tener" (to have). So you could also say "Tengo un dolor en... (and then mention the part of the body that got lucky today). Like this:

You could also say "Tengo un dolor de..." (and then mention the part of the body, without the article):

Play
Tengo un dolor de muelas
I have a toothache
(Literally: I have a pain of teeth)

(Another note: You might already be familiar with the word “dientes” for "teeth". But there's also the word “muelas” ("molars"). In Spanish they use “muelas” when talking about a toothache since 99% of the time the pain will be in those pesky back teeth.)

"Being with" pain using "estar"

As if you needed yet another way to be uncomfortable, you can also say "Estoy con un dolor en ..." ("I am with a pain in ...") and that will also get the job done.

This is just as common as using "tener", and they're completely interchangeable.

Play
Estoy con un dolor en la espalda
I have a pain in my back
(Literally: I am with a pain in the back)

"Being with" pain using "estar"

Sometimes things just don't "hurt" — there's other stuff going on that might be helpful to your doctor. Here are some other fun symptoms you can experience using tengo:

My advice would be to at least memorize that first item in the list above. There's an extremely good chance you'll need to use it at some point, and it makes a better conversation starter than talking about the weather.