For the most interesting conversation you'll have all day 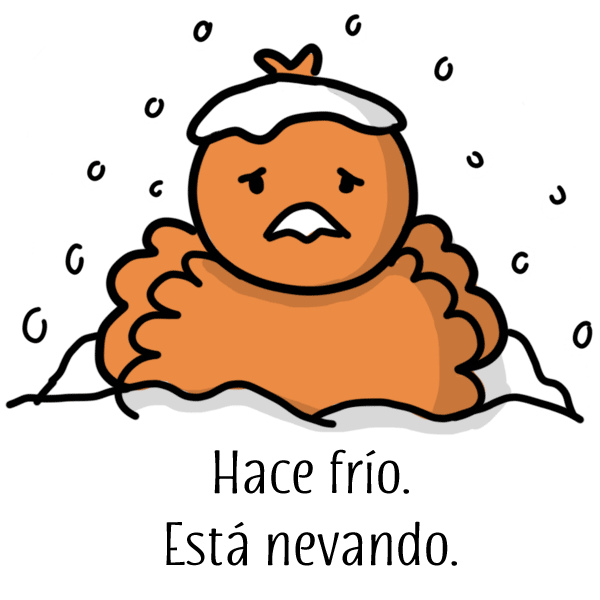 The ultimate icebreaker. The smallest of the smalltalk.

The weather is something that everyone knows about, and everyone has an opinion on, which makes it a great conversation topic when you're first learning Spanish.

Awkward in an elevator? Trying to be genial in a store? Just talk about the weather!

Times when the weather "does"

For some weather phrases you're going to use the verb hacer, which usually means "to do" or "to make".

In this case, it's used to describe what the weather "does":

Sometimes you can sum it all up with something like this:

Times when the weather "is"

For the following weather conditions we need to use the verb estar instead. (Which you might remember means "to be", and is used to talk about a non-permanent state. If there's anything non-permanent in this world, it's the weather!)

Times when "there is" some weather

Lastly there are times we'll use the verb form "hay" to indicate that there is some kind of exciting weather.

Hace is usually used to describe the general "feel" of the weather — like it's warm, or cold, or windy. Hay and está are generally more specific.

You could spend a lot of time trying to figure out the specific situations, but it's best to simply remember each delicious piece of weather vocabulary as a phrase. That way you'll never be stuck on whether to use hace or hay.

We've got some pretty colorful expressions in English concerning the weather ("raining cats and dogs" for prime example), and the same is true in Spanish.

Here are a few to tuck up your sleeve for when it's raining really hard:

If all that rain is getting you down (or if someone is simply having a hard time in life), this rain-phrase means "this too will pass":

A couple of phrases when it's cold enough to freeze the toes off a polar bear:

And when it's a little warmer...