The simple recipes for comparing two things that are not equal 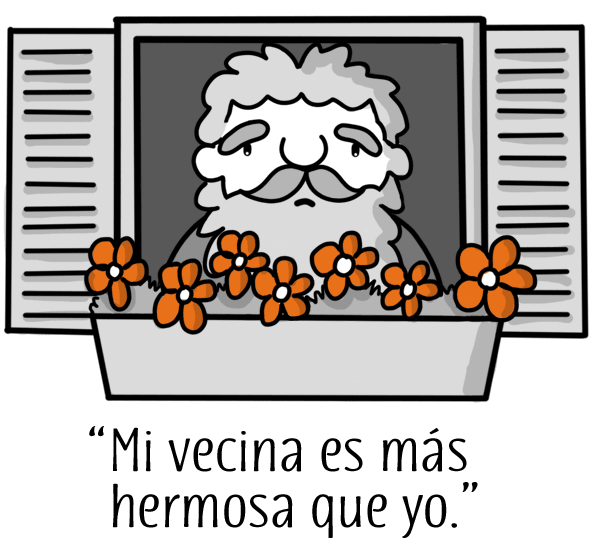 Not everything is created equal. There are some things that are better, worse, faster, slower, more expensive, or less hairy than other things.

You might be the best pie baker, but the worst gardener.

To be able to discuss this with your Spanish-speaking friend, you'll need to learn how to make comparisons in Spanish.

Luckily there are just a few simple recipes that will let you compare as much as you want.

If you want to say someone is "less hairy than me", or "more beautiful than you", it's simply a case of filling in the blanks:

After más or menos just insert whatever adjective, adverb or noun you like.

Just like in English, if it's pretty clear what you're talking about from the context of the situation, you don't need to finish the sentence.

In the above examples we could easily have left off the que yo and que el mío.

Does it ever drive you mad when you hear someone say that something is "more better" than something else? "More faster"? "Less worse?"

The reason it drives you mad is because those words ("better", "faster", "worse") already have that comparison built in. You're obviously comparing two things, so that "more" or "less" is totally unnecessary.

The same goes in Spanish. There are a few irregular comparisons when you can ditch the "más" or "menos" at the start. (You still keep the "que" though.)

Sometimes you want to say that something is "the best" "the worst" "the oldest" "the biggest", etc. This is a superlative. It means that something has the maximum amount of an adjective.

Once you've mastered the recipe for comparisons, making superlatives is pretty simple. You just need to put a definite article (la/el) on the front of everything, and instead of using "que" at the end, you'll use "de".

And again, when a word has that comparison built in (like "best" and "worst") and doesn't need the "more" or "less", you can just leave it out.