Feelings and moods in Spanish

The 3 steps to feeling in spanish 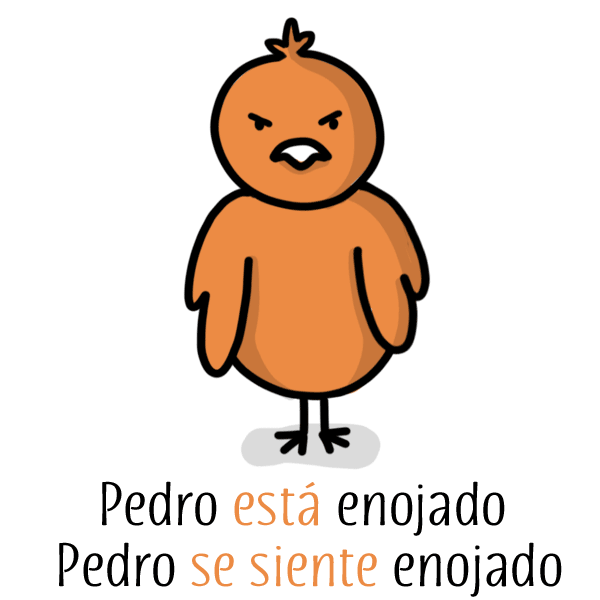 Step 1: Choose whether you want to be or feel

To talk about how someone is feeling, there are two main verbs you can use. (I won't go through their full conjugations in this lesson, so click these links if you're not familiar with these verbs.)

Can you use estar and sentirse interchangeably?

It's like the difference in English between "Amanda feels sick", and "Amanda is sick".

When Amanda feels sick, she might have a horrible bout of gastro. But she might also have a headache because she hasn't had her coffee this morning. It's more about how she feels rather than whether she actually has some affliction.

When Amanda is sick, it sounds a bit more definite. It sounds more like a proven fact.

Sometimes you can use either to be or to feel and it'll mean exactly the same thing. (E.g., I feel annoyed vs I am annoyed), but sometimes it can subtly change the meaning of what you're saying.

The same is true with estar and sentirse. Often you can use them interchangeably, but sometimes there's a subtle difference between feeling and being.

Once you've decided if you're feeling or being, move onto the next step.

Step 2: Choose your feeling adjective (and modify it if necessary)

Once you've chosen your verb, it's time to pick your feeling adjective.

I'll have an array of feelings you can feel shortly, but the important thing to note is that these are adjectives. That means they behave like other adjectives, and need to change depending on the gender of the person who is feeling the feeling.

For example, if I'm talking about someone else (Pedro, who is male):

And if I'm talking about myself (and I happen to be female, despite the manliness of the audio here... )

Play
Estoy enojada
I am angry

See how the ending is -o for Pedro (male) and -a for me (female)? If you're a bit confused by the gender-matching idea, go and take a look at this lesson on adjectives first. That'll clear things up.

But once you've got all those tricks sorted, here are a tremendous array of moods and feelings you could try today!

Step 3: Decide if you're a little or a lot

When you have feelings

In English we say that we are hungry, but in Spanish you say that you have hunger.

There are a few feelings like this: These use the verb tener (to have) together with a noun, rather than an adjective like we used above.

And because we're dealing with nouns here, you don't need to change the end to agree with the gender of the person you're talking about.

And when you have a lot of feelings?

To be very hungry, or a little sleepy, it's just a tiny bit different.

Because we're talking using nouns, we just need to say that we have "a lot" of that feeling, or "a little bit of" that feeling.